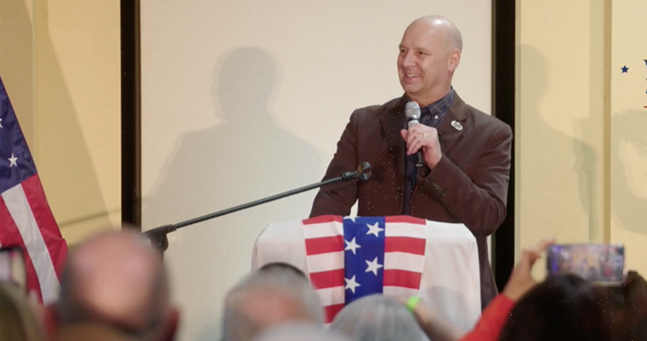 What does something as wholesome-sounding as a potato roll have to do with the assault on American democracy? The answer is James Martin. The Pennsylvania bread maker is the largest donor by far to the state’s far-right Republican nominee for governor, Doug Mastriano.

Martin also contributed to the campaign of Trump-endorsed Jody Hice, the Georgia congressman and election denier who this week failed in his attempt to unseat Brad Raffensperger, the Secretary of State who refused to “find” the 11,000 votes that would help Donald Trump overturn the 2020 election.

“I could decertify every machine in the state with the stroke of a pen.”

Martin is the patriarch behind family-owned Martin’s Famous Pastry Shoppe and has donated over $200,000 to dozens of Republican candidates in eight states over the past 15 years. But he appears to be uniquely energized by Mastriano’s campaign. His $110,000 in donations to Mastriano dwarfs any other campaign donation he has ever made to any other candidate, according to Open Secrets, a nonprofit that tracks money in politics. It’s also more than twice the amount given by any other donor to Mastriano.

Mastriano’s victory over Congressman Lou Barletta by a margin of more than 2-to-1 on May 17 set off alarm bells among those concerned about the emergence of a messianic variety of Christian nationalism that is propelling the rise of the far right. “The forces of darkness are hitting us really hard right now,” Mastriano told those who gathered in a church parking lot for a rally in Pennsburg earlier this month, according to a report in The Washington Post. “We’re going to bring the state back to righteousness, this is our day, our hour to take our state back and renew the blessings of America.”


Mastriano would have the power to thwart the democratic process in his quest to bring Pennsylvania back to his brand of righteousness. He is not merely one of the many Republican candidates and officeholders who have advanced the false claim that Trump won the 2020 election. As governor of a key battleground state, he would be uniquely positioned to illegitimately orchestrate Trump’s return to power in 2024 should the former president’s future victory hinge on Pennsylvania’s electoral college votes. Mastriano, a former colonel and current state senator, has also hinted his intention to interfere with the 2024 election.

Unlike in other states, the governor of Pennsylvania appoints its chief election officer. (In most states, it is an elected position.) “I get to appoint the Secretary of State who’s delegated from me the power to make the corrections to elections, the voting logs and everything. I could decertify every machine in the state with the stroke of a pen. I already had the Secretary of State picked out,” Mastriano said on a radio show in March. What’s more, Mastriano has embraced the fringe theory that a state legislature has the power to overturn the results of a presidential election and appoint an alternate slate of electors if it is unhappy with the way it is carried out.

Family ties and policy goals connect the Mastriano family and the Martins. Mastriano’s wife, Rebecca Stewart, served as a chaplain at Martin’s Famous Pastry Shoppe, which is headquartered in Chambersburg, in central Pennsylvania. Martin’s wife, Donna, who helps run the company, provided the Mastriano campaign with an in-kind donation worth about $4,000, according to Billy Penn, a newsletter for WHYY in Philadephia. The site also reported that his daughter, Julie Martin, social media manager for the company, also gave $2,000 to Mastriano last year. Martin’s Famous Pastry Shoppe hosted a public hearing for Mastriano in 2019 on 1000 Potato Roll Lane in Chambersburg on “regulatory review, bureaucratic red tape and Pennsylvania’s business climate.”

Some companies do make direct contributions to campaigns, but, in this case, the Martin family’s largesse consists of individual contributions by the company’s owners. The company’s marketing team said in a statement provided to Capital & Main: “Martin’s Famous Pastry Shoppe Inc. does not donate to any political candidate or party. The many individuals who work for Martin’s, as well as all the stockholders, are all free to support and vote for whoever they choose, but as a company, we do not donate to any candidate or political organization.” The Martin family could not be reached for comment in spite of repeated attempts by Capital & Main.


Martin’s Famous Pastry Shoppe’s baked goods are distributed to restaurants and supermarkets all around the globe, and its potato rolls are a key ingredient of Shake Shack’s famous ShackBurger. New York-based Shake Shack has used Martin’s potato rolls at its very first location, opened in Madison Square Park in 2004, according to Eater.

On a recent afternoon, some diners at a Shake Shack in Pasadena, California, were not happy to hear about the chain’s connection to Martin’s Famous Pastry Shoppe, given the family’s enthusiasm for Mastriano. “Now I’m sick to my stomach,” said 35-year-old Josh Cutler, a supervisor at a piping and chemical company in Echo Park. He’d just finished eating a burger with his six-year-old son. “If Shake Shack is in bed with someone like that, it’s hard to support them.”

At first, 46-year-old Kristin Pittman, a San Marino mindfulness coach, was philosophical. “It’s capitalism,” she said. She had opted for a veggie burger wrapped in lettuce anyway. She had not heard of Mastriano before and regulates her intake of politics as well as carbs. But on reflection, she said, “I’ll probably not come back here.” She had brought her daughters, who were chomping on burgers with buns.

Some companies do make direct contributions to campaigns, but in this case, the Martin family’s largesse consists of individual contributions by the company’s owners.

Shake Shack’s corporate values fit uncomfortably with those of Martin’s Famous Pastry Shoppe’s owners. The chain touts its equity and inclusion goals and its work to advance LGBTQ+ issues. “We never stop looking for the best products and best companies to partner with. We put small businesses on the map and support their growth,” according to an executive quoted in a 2021 Shake Shack report on its efforts around corporate responsibility. Shake Shack’s corporate mission is summarized by the statement, “Stand for Something Good.” Shake Shack did not respond to a request for comment.

Mastriano, meanwhile, took time to complain about allowing trans athletes to compete at schools during his election night acceptance speech. He holds a number of views that are far out of step with public opinion. He supports a total ban on abortion, without exceptions. He introduced a “fetal heartbeat bill” in 2019, which would ban abortion before many women know they are pregnant. He also introduced legislation to make federal gun laws unenforceable in Pennsylvania.

Martin has donated to other election-denying candidates during this election cycle. In 2022, he gave $1,000 each to Hice; Arkansas gubernatorial Republican nominee Sarah Huckabee Sanders, Trump’s former press secretary; and Robert W. Kauffman, who was one of 90 state legislators who sent a letter to Vice President Mike Pence on Jan. 5 asking him to delay certification of the election. Mastriano chartered buses to shuttle supporters to the rally on Jan. 6, 2021, which preceded the attack on the Capitol. He has denied breaching the barricade, although video shows otherwise.


Last year, Martin handed over the role of president of Martin’s Famous Pastry Shoppe to his son, but he chairs the company’s board and continues to have “significant influence on the direction and strategy of the company,” according to Food Business News.

Sandra Mailey is a retired kindergarten teacher in Franklin County, the rural and heavily Republican community where the Martins’ family business is headquartered. Mailey remembers that a member of the Martin family came to help out in her classroom many years before Trump was elected. “She was lovely. We certainly did not talk politics,” says Mailey, who is now chair of the county’s Democratic Party. But that was a different era. “It’s a very extreme time. It really is,” she adds.